Various miscellaneous aspects of SGFE, such as (donation) gamepasses, the map, and easter eggs are presented here.

SGFE offers 3 gamepasses. "donate" (6 R$), "Administrative" (999,999,999 R$), and "PLACEHOLDER" (46 R$). With the exception of Administrative, none of the gamepasses do anything. They are for donation purposes only and provide no benefit.

The developers of SGFE have confirmed that purchasing the Administrative gamepass is supposed to unlock Administrative, but not the unique ability it has. This cannot be confirmed by anyone else since the Robux for the gamepass costs millions of dollars, making it practically unobtainable. The gamepass is intended to be a joke and never actually bought.

There is a ramp on SGFE for the speedy modes that lets you fly into the sky. For best results, use Error. For worst results, use Love or modes of similar sluggishness. However, the ramp has more of a meaning than you would think. Next to the ramp, there is a sign saying "Ramp for speed modes."

There is a tunnel / metro / subway station entrance in the inner ring and near one of the fallen islands. It provides quick movement out of the spawn ring. To travel through it, touch the green gates on the right side of the entrance.

The tunnel exit faces the desert fallen island. On the other side of this island is a "stone area" (it may be an arena, temple, or something else, but its official name is unknown). Many stone triangles are dispersed in a circular pattern and it is implied that there were originally twelve stone pillars surrounding it. Every server randomly removes some of these stones when the server starts. The stone area does not change during gameplay.

At the center of the stone area is something composed of a glowing white cube surrounded by white lens flare and two grey rings, each of which have 24 eyes (identical to the eyes on the Orb.) It resembles some descriptions of Biblically-accurate angels, especially the Ophanim. Approaching it causes your screen to turn black for several seconds and display one of the following messages in plain white text:

You teleport to the spawn afterwards. If your abuse meter is visible, you will instantly die upon returning to the spawn.

There are eight teleportation orbs at the spawn ring, six with the standard colors of the rainbow, a black one, and a white one. Out of the eight, only two are operational and take you to floating islands in the sky. The remaining islands have placeholder opaque domes over them.

and right next to the white teleporter, there is a mostly transparent sign reading "you're not ready" the conditions to make this sign appear is currently unknown.

There are three fallen islands scattered around with light blue teleportation ovals. Touching these ovals teleports you to the topmost dome island, directly above the spawn.

The topmost island (with the red dome) contains models of the SGFE developers (see Easter Eggs below). The interior can be accessed by either using Binary's X to teleport onto the side of the dome and using a dash attack to pass through the dome, or through the fallen island portals as mentioned above.

Under the Easter Egg island, lasers coming from large towers / spires meet at the bottom of the big red island. The laser fields knock you back a considerable distance and deal heavy damage, in most cases killing the player. There is no way to get past the lasers, even with immortal modes.

There is a keypad on a post surrounding each spire. These keypads are purely decorative and are not involved with anything greater. The developers have confirmed multiple times that there is no code for them. They are programmed to always display "DENIED" regardless of the input.

On the island directly above the spawn, there are teleporters that lead to fallen islands and three representations of the developers: loplkc, Avix_G, and wanTH092. 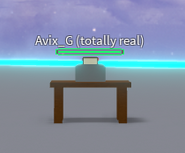 There are three hidden signs that seem to link together. However, the chain seems to end after the third sign. No one is known to have found any subsequent signs or the destination.

Shown here is Divinity's shield attack (X), while under the influence of a different color. This was originally fused with Mayhem but now could be fused with Corruption's Rare Mode, Crimson.

"Glued Wings", these stay on the base glitch (Love) and the outer wings from Unknown retain their original trail and color transparency. 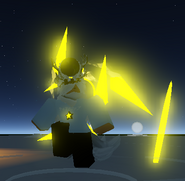 Fusing Divinity-Calamity gives the impression of Kalamari, an exclusive mode only for a specific group of people (all this does is change the attack color)

By switching from Multidiversial, and Binary, you get a purple Binary! The color of attacks and teleporting are also changed colors

Community content is available under CC-BY-SA unless otherwise noted.
Advertisement